The original Xbox holds a special place in my heart. I acquired one around the time the 360 was released and immediately fell in love with the very vast collection of apps, mods and emulators for the system. My first system had a transparent S controller that was more reasonably sized than The Duke for my hands. I enjoyed the system for many years as an XBMC box, emulator box and for light gaming. I’ve had a bunch of Xbox consoles and a couple of them bit the dust. The subject for this post was a 1.6 softmodded fellow.

I had this particular Xbox in storage for at least a couple of years when I decided to pick it up again. I connected the shitty component cables to one of my Dell U2410 monitors and to my surprise it did not boot up correctly. After acquiring some DVD-Rs I got a bunch of recovery disks ready, but there was nothing to be done. The old shitty Maxtor drive from my high school computer had finally given up. This being a version 1.6 I had softmodded it. I of course could not find the very important DVD or CD that had a backup of the original EEPROM of the Xbox in question. This meant that I effectively had a bricked softmodded console with no means of reviving it. Then the research began.

I quickly stumbled upon a guy who read an EEPROM using a Raspberry Pi, but this seemed a little excessive in terms of hardware. An EEPROM is an i2c device and booting an entire linux machine specifically to read i2c seemed like overkill even though the PiPROM project is awesome. I then remember fiddling around with the EDID on my old Lenovo T500 and a tool called i2cdump. Inside your monitor there’s a small i2c device that holds a bunch of information about what resolutions the monitor supports and the like. This can be read using fairly standard commands on a linux machine. This means that inside your VGA (DVI and HDMI have them too) port there are pins dedicated to i2c communication. The Wikipedia page on the VGA Connector has a pinout. Pin 12 and pin 15 are the ones we are interested in. These are the SDA (serial data) and SCL (serial clock) pins. Pin 10 is ground and pin 9 is +5V for powering the EEPROM.

I just wired the cables directly to the EEPROM chip, but you can use the LPC header instead. The wiring is dead simple:

The crude diagram below shows how to wire the stuff. 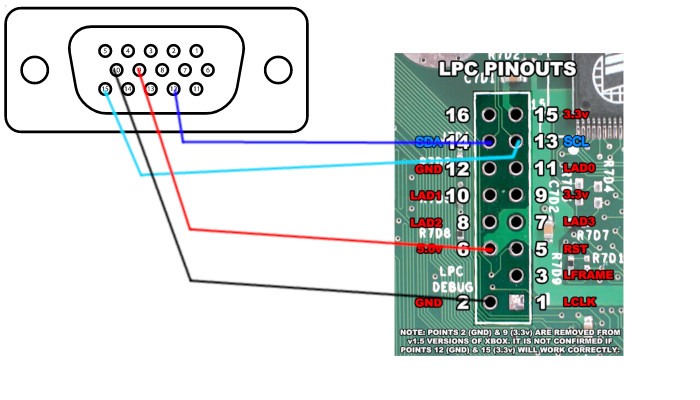 Now load linux on your VGA device and get a hold of i2cdetect. On Debian and Ubuntu install the i2c-tools package.

To locate your chip run:

Your output will be something in the lines of:

Run the command before and after connecting the EEPROM to the VGA cable, if a new address shows up in the output of i2cdetect that is your EEPROM. For the sake of argument let’s say 0x54 of i2c device 0 is the address we want to dump. Dumping the actual contents can be done using i2cdump but you will need to reconstruct the file by hand. You can instead use the eeprog tool written byt Stefano Barbato to simplify the process. It isn’t in the Debian repos but is easily obtained from the tool’s website. Download, extract and run make in the folder. If you do not have make install build-essential.

Once you have eeprog installed dumping the firmware is done by simply running:

Notice that eeprog uses /dev/i2c-x for referring to the device number. This is the same number you used in the i2cdetect command. You may have a bunch of different devices that use i2c. On my Ryzen machine there are a total of 11 i2c devices. This number will vary between machines. The same tool can be used to write a new EEPROM image should you want to change regions on a box.

With my EEPROM dumped I could recover the HDD key and lock me a new old stock 320GB drive and load up EvoX on it.

If you made it this far, thanks for reading. There will be more posts about the OG Xbox in the future.