A couple of days ago I finally received the actual cruise control lever for my car. The installation manual was in German, meaning I had to brush up on my high-school linguistics.

The installation procedure is a four-part one:

NOTE: I didn’t take enough pictures of the process, but luckily it is well-documented elsewhere. Check out the comprehensive guide on team-bhp.com

I got it working after some fucking around with the wiring. I accidentally put the ECU wire in the wrong terminal and got it stuck. After forceful removal the wire broke and I attempted repairs, yielding a not perfect connection on the correct terminal. The wire broke AGAIN and I had to hack it somewhat.

This should have been the easy part. First you need to run a cable from within the cabin into the engine bay. This can be done using a hard steel wire or the like.

The manual suggests running the wire on the driver side next to the steel cable that pops the hood. This is a fairly tight squeeze, you may need some rather hard metal to get the wire through.

Once you have the wire inside the cabin, tie the ECU wire from your wire kit to your piece of metal. Pull the wire into the engine compartment.

Unhook your engine intake air filter and unscrew your ECU. You can now wiggle the ECU out of the harness and undo the very satisfying clamp that holds the ~100 wire cable.

Now find the relevant terminal for your cruise control wire. This differs by engine type, on my 1.6 TDI it was terminal 64. If there’s a wire there already, consult your seller. The guide I got said just to remove the old wire.

I botched this the first time by wiring it into the wrong terminal. Triple-check your wires AND the terminal orientation before you click them in place. Removing the temrinal can be a bitch.

You need to remove the airbag for the next part. Airbags can be very dangerous, and if you are at all uncomfortable with exploding bags of gas in your face, seek professional help for this part. 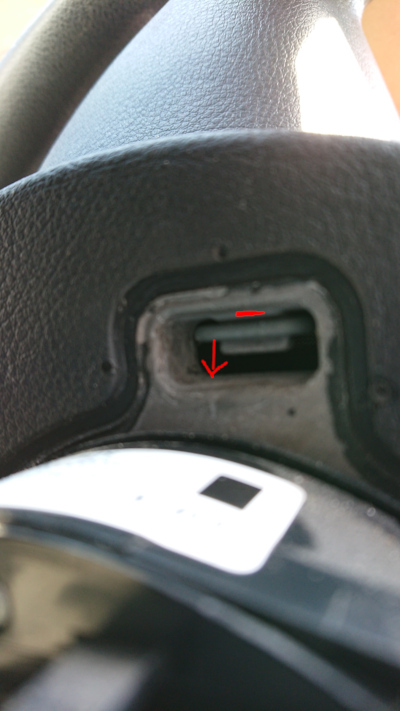 The clip is spring-loaded with significant tension so be careful with your screwdriver. I used a small flat head screwdriver bent at an angle. Press down on the clip and gently wiggle the airbag out in one side. When you have cleared a side proceed to the opposite one and do the same. The airbag is connected with a single connector attached to a wire. When you pop out the airbag be careful not to break the cable. Store the airbag somewhere safe like your trunk.

The next part is the steering wheel position sensor and the levers. There are two selftapping screws to remove that hold the plastic cover in place. These are located top front of the cover. Now you are left with a naked lever assembly being held in place by one screw.

Don’t replace the lever assembly yet. Remove the old lever and further disassemble the wiring harness in preparation for the BCM wiring. Consult the guide you got with your cruise control kit for actual pinouts. The team-bhp forums are also a good place to look for pictures.

You need to disassemble the BCM connector to insert extra wires. This is tricky since the connectors are found below the steering wheel and can be frustrating to work on. Five or so wires go from the BCM up to the steering wheel and lever, one wire goes to the ECU. Depending on the BCM and where in the world you are located, the wiring can actually differ.

The process is a little finnicky but if your wiring kit has the correct terminals, it is fairly easy once you get the hang of it. When the BCM is wired up connect the wires to the steering wheel terminals and reattach the lever assembly. You are almost done! Assemble the steering wheel again and be sure to attach the airbag before powering on the car, otherwise you will have a bunch of annoying DTCs that take a while to get rid of.

The coding was very trivial compared to the rest. In VCDS go to 09 Central Electronic -> Coding -> Long Coding Helper and set bit 7 on byte 17. It is labelled Cruise Control System (CCS) installed.

That was it. Now go drive your car with cruise control!

This was by far the most comprehensive mod I have done on a car. It was an awesome learning process and in the end I had a working cruise control. I would not recommend this mod for everyone, but if you have an older shitty car like me, it certainly adds to the driving experience. Knowing that the parts are OEM and the system is tested and certified by VW is the cherry on top.

The cruise control was tested thoroughly this summer on a roadtrip through Europe and it worked like a charm.